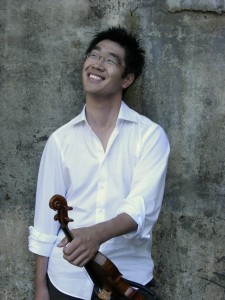 Violinist Soovin Kim is an exciting player who has built on the early successes of his prize-winning years to emerge as a mature and communicative artist.  After winning first prize at the Niccolò Paganini International Competition, Mr. Kim’s artistry was affirmed by the Borletti-Buitoni Trust Award, an Avery Fisher Career Grant, and the Henryk Szeryng Foundation Career Award.  Today he enjoys a broad musical career, regularly performing repertoire such as Bach sonatas and Paganini caprices for solo violin, Mozart and Vivaldi concerti without conductor, major Romantic concerti, sonatas for violin and piano by Beethoven, Brahms, and Ives, string quartets, and new world-premiere works almost every season.

Soovin Kim has performed throughout the United States, Europe, Asia, and South America in Carnegie Hall, the Kennedy Center, Amsterdam’s Concertgebouw, London’s Queen Elizabeth Hall, Vienna’s Musikverein, Moscow’s Tchaikovsky Hall, and the Seoul Arts Center.  He has been a soloist with the Philadelphia Orchestra, San Francisco Symphony, Salzburg Mozarteum Orchestra, Accademia di Santa Cecilia of Rome, the Moscow Symphony Orchestra, and the Seoul Philharmonic. As well as performing as a soloist, Soovin Kim devotes much of his time to playing chamber music, primarily as 1st violinist of the Johannes String Quartet, as founder of the MIK (“Made in Korea”) piano quartet, and at Vermont’s Marlboro Music Festival.

Mr. Kim is a very active recording artist.  He has commercially released 4 solo albums, most notably Paganini’s demanding 24 Caprices for solo violin that was named Classic FM magazine’s Instrumental Disc of the Month (“he emerges thrillingly triumphant…a thrilling debut disc.”), and 7 chamber music albums.  Later in 2018 he will release a 2-disc set of Bach’s monumental 6 unaccompanied sonatas and partitas.

Mr. Kim is also in great demand as a teacher.  He has previously taught at Stony Brook University and the Peabody Institute of Johns Hopkins University, and now lives in Boston where he recently joined the prestigious string instrument faculty at the New England Conservatory.  His students already tour the world  as soloists and in award-winning string quartets, and play in the world’s major symphony orchestras.

Soovin Kim grew up in Plattsburgh, NY. He spent 5 years playing in the Vermont Youth Orchestra and performed as a teenager throughout the area with organizations such as the Vermont Symphony Orchestra and at UVM Recital Hall.  In 2008 he founded the Lake Champlain Chamber Music Festival (LCCMF) which has become a fixture in the cultural fabric of Vermont.  With its focused programming and exceptional artists the festival is “increasing its stature as one of this country’s summer chamber music meccas (Rutland Herald).”  Mr. Kim and LCCMF helped to create the ONE (Old North End) Strings program at the Integrated Arts Academy in Burlington which makes violin lessons part of the regular curriculum for every 3rd-5th grade student.  LCCMF is recognized for greatly enhancing cultural life in Vermont through its performances, lectures, masterclasses, and outreach activities at the Elley-Long Music Center at St. Michael’s College and at venues around downtown Burlington such as FlynnSpace and the Cathedral Church of St. Paul.