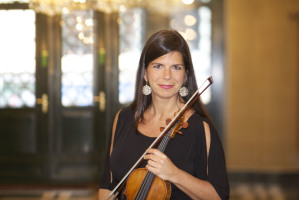 Pamela Frank has established an outstanding international reputation across an unusually varied range of performing activity. As a soloist she has performed with leading orchestras including the New York Philharmonic, the Chicago Symphony Orchestra, the San Francisco Symphony, Academy of St. Martin in the Fields, the Berlin Philharmonic and the St. Petersburg Philharmonic. Pamela performed regularly with the Zurich Tonhalle Orchestra, recording the complete Mozart Violin Concertos with them and David Zinman and has also recorded a Schubert album and the Beethoven sonata cycle, both with her father Claude Frank. Pamela is a sought-after chamber musician and has performed at many international festivals including Aldeburgh, Verbier, Edinburgh, Salzburg, Tanglewood, Marlboro and Ravinia.

Aside from her devotion to works of the standard repertory, Pamela has performed and recorded a number of contemporary works. Her accomplishments were recognized in 1999 with the prestigious Avery Fisher Prize. Pamela is professor of violin at the Curtis Institute of Music and teaches and coaches annually at the Tanglewood, Ravinia and Verbier Festivals. Since 2008 she has been the Artistic Director of the Evnin Rising Stars, a mentoring program for young artists at Caramoor Center for the Arts. Her newest venture is the formation of Fit as a Fiddle Inc., a collaboration with physical therapist Howard Nelson in which they use both their expertise for injury prevention and treatment of musicians.