We miss you, Manchester! Fans of this concert know how delightful it is to spend a summer day enjoying the area’s shops, restaurants, and swimming holes, then head to Hunter Park for an evening of music and fireworks. Summer isn’t the same without a stop in Manchester, but here’s a small slice of Summer Festival Tour fun to tide us all over to next year. 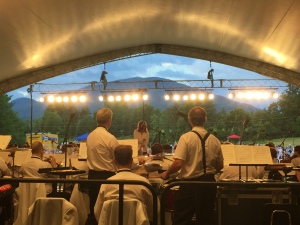 Melissa Mielens, Principal Flute: I can give a massive shout out to Charlie’s Coffee House in Manchester. After days on tour I bought a coffee at Charlie’s (along with multiple very large cookies) and thought life had suddenly reached a zenith. I specifically remember the incredible relief after my first sip of a proper caffeine fix.

Grace Spain, Box Office Manager: The first Summer Tour concert I worked was in 2012, the last year we were at Hildene. For those who don’t remember, the crowds at Hildene used to number around 2000 and to sell/take tickets, people would have to drive through what staff called “The Gauntlet.” In The Gauntlet, staff and volunteers would act as runners, wearing aprons and selling tickets to people through their car windows. So here I am, thrown into the deep end of the pool, running back and forth between cars, selling tickets and ripping stubs and running will-call tickets, in a field in the hot sun, for two hours straight. It was absolute chaos, but it was so much fun and such a great way to navigate the frantic energy that makes working our outdoor concerts so special. 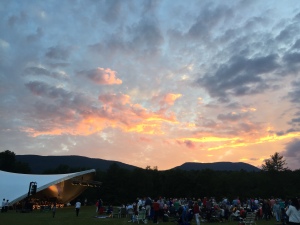 Janet Polk, Principal Bassoon: While cell phones and GPS are still not as reliable in Vermont as they are in other parts of the country, finding host homes in the dark is much easier now. Back in the pre-911 days, road signs were not necessarily present, and I remember having a terrible time trying to find a host in Manchester. The directions were quite vague with turns onto roads that were indicated by the presence of dark brown barns or stone wall fences. Amusing, but not helpful at all: “It is a white farmhouse with green shutters.” Do you know how many white farmhouses with green shutters there are in Manchester??  I did eventually find the place. I heard later that that same night a VSO violinist could not find his assigned host and decided to stop at a house to ask for help.  The owners of the house were as flummoxed by the directions as he was, so they invited him to stay the night there. Now that is Vermont hospitality at its finest!

Eleanor Long, Orchestra Manager: In 2016, this was the concert where the trumpets stood on their chairs during the marches! Pretty spectacular—if spectacularly unsafe. Last year our guest conductor, Sharon Lavery, dropped her baton in the field after the concert. Kelli O’Connor, our Principal Clarinet, saved the day by stopping by the next morning and scouring in the grass until she found it. Every year we look forward to the donation of delicious Lemon LuLus for the orchestra’s pre-concert meal from our friends at Mother Myrick’s. 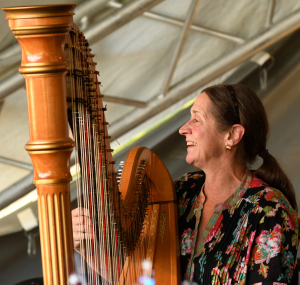 Joy Worland, horn: My first summer tour with the VSO, the first concert was in Manchester. At the end of the 1812 Overture I glanced over at our harpist, Heidi Soons. I thought for a minute that she was doing some kind of interpretive dance number. Then I realized she was actually playing the cannon part, with a bit of extra flair.

Many of our musicians have their own tour traditions and favorite places to visit while traveling the state. Click here for an interactive map of Second Trumpet Greg Smith’s favorite cycling routes, and here for a map of Principal Horn Shelagh Abate’s go-to tour stops. 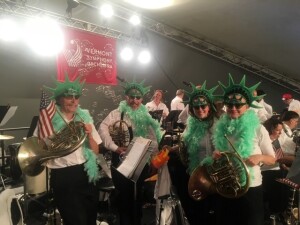 We are so grateful for our tour sponsors and partners who help make our tour possible year after year.

Thank you also to the individuals who help to make our concerts possible.

One of the highlights for the staff on our Summer Tour is an overnight at the Dorset Inn, which graciously donates rooms to the VSO. A special shout out goes to Tom, the bartender who manages to keep the bar open just a bit longer for a celebratory cheers and a bowl of Goldfish for a late night snack. 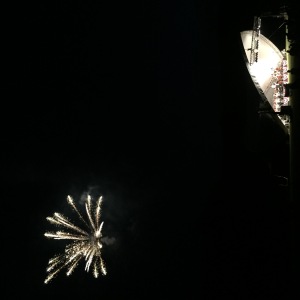 Manchester residents and visitors are probably familiar with Northshire Bookstore, a family-owned staple in the community. Northshire has acted as a ticket vendor for our Manchester concerts for over a decade. It’s a win-win for VSO patrons when they can pick up both a book (or five) and a ticket to a summer show, and the VSO staff knows to build an extra hour into their Manchester trips to browse Northshire’s shelves.

Dafydd Wood, Events and Community Outreach Coordinator: Northshire Bookstore is proud to support the Vermont Symphony Orchestra. Both institutions are vested in strengthening the arts, community, and culture of our beloved Vermont.

No fireworks show would be complete without Tchaikovsky’s 1812 Overture. When the pandemic upended this year’s tour, VSO musicians decided to record each of their parts in their own homes, so that they could still perform together—and share a musical moment with all of our extended VSO family. Please enjoy the intro courtesy of our cello section, and the finale with the full orchestra.

As the fireworks continue, it’s our tradition to play a variety of Sousa marches. Here’s The Stars and Stripes Forever, from five VSO violas.

And, in lieu of a visit to Vermont this summer, our trombone section has donned their concert attire to take care of business at home.

Looking for more music? We’ve made a playlist with some favorite pieces from past Summer Festival Tour programs (on Spotify below and YouTube here).

Wishing you all a safe and happy holiday week. Feel free to join us virtually for each stop on our tour—tomorrow we’re showcasing Grafton!