José Daniel Flores-Caraballo leads the Orchestra and Chorus in a festive program that ranges from an a cappella version of “Jingle Bells” to the blockbuster “Many Moods of Christmas.” We pay tribute to the late great Robert De Cormier with three of his iconic arrangements, and present the Vermont premiere of a sweet ballad, “Little Tree” by Steve Murray. Never fear, the audience has a role to play…. And of course Holiday Pops can’t officially ring in the season without “Sleigh Ride.” Join us for the celebration!

For venue accessibility information, please call the Paramount Theatre at (802) 775-0903. 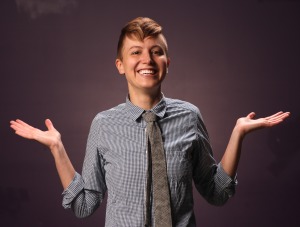 Hillary Boone is a stand-up comedian and storyteller. She spent her childhood in a log cabin in the Northeast Kingdom of Vermont. After traveling the country and some of the world, she is back in her home state, making people laugh.

In addition to performing stand-up around New England, Hillary is also a member of the Vermont Comedy Divas and the Divas Do Good initiative, raising money for local nonprofits. She takes part in comedic storytelling events, and is a host of the Moth StorySLAM. Hillary has opened for comics such as Deanne Smith, Myq Kaplan, and Michelle Buteau.

When she’s not on stage, Hillary works at Efficiency Vermont, managing programs. She is a non-profit trainer and facilitator, and teaches “Outcomes and Evaluations for Learning Organizations” in the graduate program at Marlboro College. She has presented her work in measuring impact internationally.

In her free time, Hillary is a board member at Spectrum Youth and Family Services and the Howard Center. She lives in Colchester with her wife and dog. Hillary is thrilled to be appearing with the VSO again!